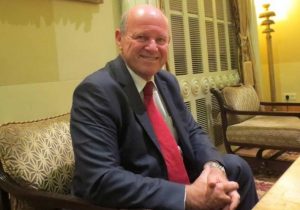 Victoria, Mahe (Seychelles) – May 10, 2017 (travelindex.com) – The Seychelles President Danny Faure withdrew the candidature of Alain St.Ange from the election to the post of Secretary-General of the United Nations World Tourism Organisation without asking Mr. St.Ange. Mr. St.Ange, commented, “It is a coup d’état by Africa Union on Africa.”

St.Ange told Travelindex that it is deplorable that Seychelles took that decision. “Africa endorses a candidate but does not impose a candidate. The IOC, the Indian Ocean Commission with four African Union members endorsed the Seychelles Candidate. The sanctions threat on Seychelles by African Union is a blackmail and not acceptable at the United Nations level. It is a Coup d’état except the guns have been replaced by threats.

Alain St. Ange ran a magnificent and courageous campaign for the position of Secretary General of the World Tourism Organisation (UNWTO). Mr. St. Ange’s energy and unquestionable capacity as well as his vision on issues like climate, safety or small island needs will all be lost.

President Danny Faure chaired an Extra-Ordinary Cabinet meeting at which the Cabinet considered a formal request from the African Union Commission for Seychelles to withdraw the candidature of Mr Alain St Ange for the election to the post of Secretary General of the United Nations World Tourism Organisation.

The Seychelles Government said: “Having considered the stance taken by Seychelles at the Southern African Development Community (SADC) meeting in March 2016, and at the African Union (AU) meeting of July 2016, where member states, including Seychelles, had unanimously voted to support the Zimbabwean candidate, Cabinet members formally reviewed its decision to support the candidature of Mr St Ange.”

A source close to the Government said; “After seeing Mr. St Ange as the front-runner and preferred successor to Dr. Taleb Rifai as the next Secretary-General of the World Tourism Organisation, threats and coercive pressure has been applied at the highest level.”