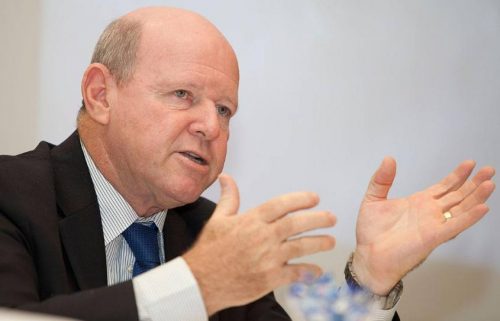 Victoria, Mahé, Seychelles, December 10, 2020 / TRAVELINDEX / Presidential candidate of One Seychelles political party in the just concluded elections held in October 2020 and Former Tourism Minister, Alain St. Ange, has been praised for his immense contribution to the tourism industry and the Republic of Seychelles following his retirement from politics.

Editor and TV producer, Bea Broda while extolling the erstwhile minister for his outstanding performance in the sector said: “I have found Alain St.Ange to be incredibly beneficial to the global tourism industry with his outlook both towards tourism and also to what makes a country run peacefully and advantageous for all. While he is retiring from pursuing politics, it is admirable that he undertook the establishment of a party with excellent objectives, and I know we will see him emerge again as a positive force in tourism.”

According to beabroda.com, the National Executive Committee of the ONE SEYCHELLES political party on Saturday 5th December hosted a small gathering, where it was confirmed that the President of the Party and its 2020 Presidential Candidate, namely Alain St.Ange, was stepping down officially from his role.

Alain St.Ange stated, “It was, and remains, an honour to have been chosen to represent the ONE SEYCHELLES political party as your Presidential candidate, and a privilege to have worked tirelessly by your sides over the course of the past two years as the Party President to advance our common goals and to give voice to the vulnerable members of society who have steadfastly and relentlessly been oppressed, silenced and marginalized.

The causes we have been championing and the values we have sought to uphold and defend are just as important today as they were when we embarked jointly upon this journey.

“My decision to step down is twofold. When I accepted my nomination initially to represent the Party, I made it widely known that I would only be in a position to do one term, on account of my age. I gave it my best, and Seychelles made its choice. In five more years, the present Government and its performance will be vetted by the citizens of Seychelles, and they will have the opportunity to choose once more. It is my sincere hope that ONE SEYCHELLES will be participating in the upcoming elections with fresh, young and capable candidates ready to take the helm.

The groundwork has been done, and I have every confidence that the momentum will continue to build over the course of the next five years.

“My second reason for stepping down is that my role in politics would conflict heavily with any advancement in my career within the field of tourism.

I am in the process of exploring some avenues, and I am excited by the prospect of flying the Seychelles flag in some capacity on the global stage soon.

“I today take this opportunity, as I humbly bow out, to say thank you to my family and friends who stood by me in these challenging times and for their uncompromising support. I also wish to thank all those who believed in me, believed in us as a Party, and who pledged their support to us in the last elections. If you never try, you’ll never know. Life is too short for what-ifs. I have tried, and though I did not succeed in leading the Country, I hope that I have succeeded in planting a seed. It is my greatest wish that others will feel inspired to participate actively in our young democracy and, when necessary, to go against the grain; to actively do something to effect the changes we seek instead of merely complaining about the system and watching things unravel from the sidelines.”

Peter Sinon, the Secretary General of the ONE SEYCHELLES political party, thanked Alain St.Ange for his hard work, conviction, dedication and passion for the cause.

He shared several anecdotes of their experiences on the campaign trail over the past two years, noting that Mr. St.Ange was always in his element when meeting new people and interacting with others.

He acknowledged Mr. St.Ange’s genuine concern for the people of Seychelles and their shared passion to empower Seychellois. He acknowledged the wealth of experience and expertise that Mr St.Ange brought to the table as a technocrat within the field of tourism.

Mr. Sinon, who will be acting as the Party President until the January 2021 Party convention, stated that the Republic proved a month ago that they were ready for a change.

However, the jury is still out on whether the new Government that has been elected is capable of bringing the change that has been promised, or whether it is a sad state of “change for the sake of change”.

He stated, “What we are seeing today, a month after the pivotal National elections, is that the issues affecting the poor and vulnerable members of society are still not being prioritized. They are disproportionately feeling the crushing weight of the ever-increasing costs of living.

“Many had hoped for innovative ideas to re-build and strengthen our economy and our key industries, but so far we are only witnessing continued publicised courtesy calls by Ministers to relevant departments weeks after coming into higher office. The stakes have never been higher, and Seychelles urgently needs proactive and strong leadership as opposed to a mere shuffling of power.”

Mr. Sinon gave a heartfelt thanks to all National Assembly candidates who bravely tossed their hats into the ring for the last elections. He acknowledged their courage and determination to do what is right, and not what was easy. Their dedication, conviction and integrity were commended. Mr. Sinon urged them to keep striving and working to bring about the real change that Seychellois deserve.