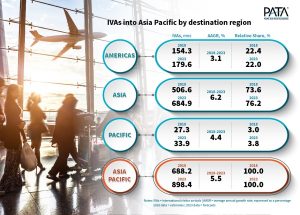 Bangkok (Thailand) – February 7, 2019 (travelindex.com) – The overall annual growth rate for international visitors into 40 Asia Pacific destinations is estimated to have been around 7.8 percent in 2018, generating an inbound volume of around 688 million for the year – almost 50 million more foreign arrivals than in 2017.

According to the Executive Summary of the Pacific Asia Travel Association (PATA) ‘Asia Pacific Visitor Forecasts 2019-2023’ released today, 40 destinations within Asia Pacific collectively are predicted to show an average growth rate of 5.5 percent per annum between 2018 and 2023, to host close to 900 million foreign visitor arrivals in 2023.

Asia will continue its strong growth momentum with an expected annual average growth rate for foreign visitor arrivals of 6.2 percent between 2018 and 2023, while the Pacific and the Americas follow with average growth rates of 4.4 percent and 3.1 percent per year respectively, over the same period.

Driven by its strong average annual growth rate, Asia will receive the bulk of the foreign arrivals between 2018 and 2023. After capturing a relative share of close to 74 percent of foreign arrivals in 2018, the proportion into Asia is expected to increase to over 76 percent by the end of the forecast period (2023). The impact on the Americas and the Pacific is a slight contraction in their respective relative shares from 22.4 percent in 2018 to just under 20 percent in 2023 for the former, and from four percent to 3.8 percent for the latter, even as their respective numbers of foreign arrivals increase.

Intra-regional travel flows remain important for both the Americas and Asia, with the former destination region seeing over three-quarters of its foreign arrivals originating within that region in both 2018 and 2023.

The Pacific destination region differs, in as much as more than half of its inbound international visitor arrivals originated in Asia in 2018 with that proportion forecast to increase to around 57% by 2023. Even so, the intra-regional flows from the Pacific to the Pacific remain significant at over 30% in 2023.

PATA CEO Dr. Mario Hardy points out that “Asia continues to be the engine of growth for foreign arrivals into Asia Pacific, with intra-regional flows in particular, remaining important. This intra-regional activity is true for the Americas as well, but less so for the Pacific which is rapidly becoming more popular with Asian markets.”

He further adds, “Once again, we need to be mindful of the fact that in delivering positive and memorable experiences to a rapidly changing inbound market mix, we need to maintain a service ethic and mind-set that is consistently superior and at the same time, tailored to the very different needs of an increasingly diverse range of visitors”.

Furthermore, Dr. Hardy noted that, “In developing a service mindset we need to ask ourselves are we preparing to welcome 898 million foreign arrivals into Asia Pacific in 2023, or should we think of that instead, as one very special visitor, 898 million times. Your perspective on that can make all the difference”.

This report is available now at the PATA Store at

About PATA
Founded in 1951, PATA is a not-for-profit membership association that acts as a catalyst for the responsible development of travel and tourism to, from and within the Asia Pacific region. The Association provides aligned advocacy, insightful research and innovative events to its more than 800 member organisations, including 95 government, state and city tourism bodies, 20 international airlines and airports, 102 hospitality organisations and 70 educational institutions, as well as over a hundred young tourism professional (YTP) members across the world. The PATA network also embraces the grassroots activism the PATA Chapters and Student Chapters, who organise numerous travel industry training programmes and business development events across the world. Thousands of travel professionals belong to the 35 local PATA Chapters worldwide, while hundreds of students are members of the 22 PATA Student Chapters globally. Their local activities underpins PATA’s membership in Uniting Travel, a coalition of the world’s major Travel & Tourism organisations dedicated to ensuring that the sector speaks with one voice and acts in unison on the major issues and includes ACI, CLIA, IATA, ICAO, WEF, UNWTO and the WTTC. The PATAmPOWER platform delivers unrivalled data, forecasts and insights from the PATA Strategic Intelligence Centre to members’ desktops and mobile devices anywhere in the world. PATA’s Head Office has been in Bangkok since 1998. The Association also has official offices or representation in Beijing and London.