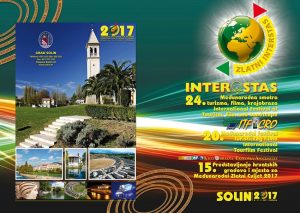 Solin (Croatia) – November 19, 2017 (travelindex.com) – Three international tourist, film festivals and landscapes events: 24th INTERSTAS / International Festival of Tourism, Film and Landscape, – International Club for Merited in Tourism, 20th jubilee ITF’CRO / International Tourfilm Festival, and 15th KEA-CRO / presentation of Croatian cities and places / villages for the INTERNATIONAL GOLDEN FLOWER AWARD and a special prize “Dr. Lucija Čikeš “, held for the eighth time (on 8th, 9th and 10th of November, 2017) at Hotel President, Solin. Along with the main hotel host, the event is supported by; Ministry of Tourism of the Republic of Croatia, Croatian National Tourist Board, World and European Federation of Tourism Journalism, Film and Sustainable Development – FIJET, FEST, ITCO, CiB. The sponsors are: County of Split, City of Solin and under the high patronage of the President of the Republic of Croatia, Mrs. Kolinda Grabar Kitarović.

On the 24th INTERSTAS 2017, for prizes from five different categories awarded to individuals and institutions; Golden INTERSTAS, Chart FEST, special Recognition INTERSTAS, Special Award “Dr. Lucija Čikeš “, Certificate – KEA for International Golden Flower Award, from  28 countries of the world there have been 136 proposals regarding participation. Based on the received proposals International Commission of Tourism Journalists and Writers accepted 75 candidacies and nominated  37 candidates for one of the awards. Out of all five different categories from Croatia and the world, the Event Director and the Central Committee of the FEST / European Federation of Travel Journalists have decided for 28 Laureates, of which  7 are Laureates for the most prestigious international tourist award FOR Excellence In Tourism – Golden INTERSTAS Award 2017. The main focus of Golden INTERSTAS Award, founded in 2003, is dedicated to selected tourist destinations of local, regional, national destinations, responsible tourism and introducing best practice examples for other destinations around the world.

For each Laureate, individual and organization, from all five different categories that have been awarded with these prestigious international tourist, film festivals, landscape-flower awards at the final ceremony, their nominations are explained by the Committee for: excellence, high quality of work, and recognition of their creativity and individual contribution by individuals and organizations who through their professional, scientific and practical work activities and their projects development programs, tourist offer and presentation, promote, enhance, enrich the tourist and cultural offer and thus contribute to the integrity of the development of tourism on the local, regional or national level. This is one of the most prestigious international tourist awards. This certainly contributes to prosperity, quality, better living, better understanding between peoples, and thus confirms the justification for awarding these prizes to the international club responsible for tourism development. Selected Laureates from each of the five categories, according to the prize-giving propositions, are presenting themselfs within the framework of the two-day exhibition program of the event – INTERSTAS.

At the 2th. jubilee International Tourfilm festival – ITF’CRO, from  80 world countries from all continents, arrived 301 films. There has been nominated  104 film from 56 countries. Of that  92 foreign and  12 from Croatia in a competition for some of the festival awards, the national prize “Baldo Čupić” and the Grand Prix. By the decision of the International Jury of the Festival, with Special Recognitions and Diplomas, the main awards were awarded; for the best director, screenplay, music, picture and editing and also TROPHY „DUJAM“ and GRAND PRIX – ITF’CRO ‘2017.

For the 15th Certificate For KEA-CRO / International Golden Flower Award, and Special Award “Dr. Lucija Čikeš “, out of a total of 9 Croatian candidates and 5 nominees, by the decision of the Directory of the Event one candidate, in each category was selected, with the explanation of excellence.