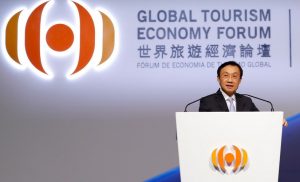 Macao (Macao SAR) – October 17, 2017 (travelindex.com) – The sixth edition of Global Tourism Economy Forum (GTEF) was unveiled on 16 October at Grand Hyatt Macau. As the leading international tourism platform designed to promote sustainable development of the global tourism industry with a focus on China, GTEF supports China’s Belt and Road Initiative and embraces the “16+1” economic framework between China and the Central and Eastern European Countries in its 2017 edition under the theme of “Regional Collaboration towards a Better Future”. The Forum gathers many ministerial officials, leaders of globally‐renowned corporations, experts and scholars from around the world to explore how tourism collaboration characterized by shared interests and mutual respect is conducive to the building of a better future among nations and regions, and creation of opportunities and synergies.

The Forum welcomes a great number of delegates from many countries and regions around the world, including the Partner Region – the 16 Central and Eastern European Countries (namely Albania, Bosnia and Herzegovina, Bulgaria, Croatia, the Czech Republic, Estonia, Hungary, Latvia, Lithuania, Macedonia, Montenegro, Poland, Romania, Serbia, Slovakia and Slovenia) and Guizhou Province as the Partner Province. The two-day event is covered by over 150 international and domestic members of the press.

The Forum Chairman of GTEF, Ho Hau Wah, addressed the opening ceremony, “Hosted in Macao for six consecutive years, GTEF has established itself as a prominent annual international tourism event. Each year, GTEF successfully gathers global elites from the tourism and tourism-related industries at the Forum to offer their advice and suggestions for the well-being and sustainable development of the global tourism economy. After years of dedicated effort, GTEF has gained extensive international attention and high-level acknowledgment and support from the Central Government.”

Representative of the Chief Executive of the Macao Special Administrative Region, Secretary for Social Affairs and Culture of the Macao SAR Government and Executive Chairman of GTEF, Alexis Tam, delivered welcome remarks to the guests, “After six years of dedication and progress, the Global Tourism Economy Forum has developed into a key platform gathering decision makers and leaders of the tourism industry from worldwide to build a brighter prospect for the tourism economy. The Forum not only highlights the outlook of the 16 Central and Eastern European Countries, but also features Guizhou Province as the Partner Province, stepping up to pave new paths for collaboration among delegates from China and around the globe. We will pour unreserved efforts to transform Macao into a world centre of tourism and leisure as well as a commercial and trade cooperation service platform between China and Portuguese-speaking countries, as we work towards our aspiration to serve our Country and connect to the world by making a more wide-reaching contribution to regional collaboration, and reap a greater harvest of shared interest and mutual gain in the long run.”

Secretary-General of UNWTO and Honorary Chairman of GTEF, Taleb Rifai, delivered his keynote speech, “It is very inspiring to see how Macao has been turning itself into a world leader in tourism. And how this Forum has gained a special space of thought leadership. This year’s Forum is a reminder to us that across every country, every destination and every community, economic growth must go hand-in-hand with sustainable development, people’s wellbeing and a better understanding among nations and people of all backgrounds.”

Playing an integral role in China’s Belt and Road Initiative and in the development plan for a city cluster in the Guangdong-Hong Kong-Macao Greater Bay Area, Macao’s pivotal position as an East-meets-West cultural hub is becoming increasingly prominent. The city is dedicated to promoting moderate diversification of its tourism-driven economy as the city forges ahead with the goal of becoming a world centre of tourism and leisure, a commercial and trade cooperation service platform between China and Portuguese-speaking countries as well as a base for exchange and cooperation, where Chinese culture prevails and different cultures flourish in harmony. Offering key reference and directions for the development of the global tourism and tourism-related industries, GTEF also demonstrates Macao’s capability to organize international mega events and readily raises the status and impact of Macao as an international tourist city and a regional travel destination, while reinforcing a solid foundation for mutual success with its neighboring regions and the rest of the world.

The Forum’s two-day programme presents thought-provoking keynotes and discussion panels, starting with its signature Face to Face, Ministers and Private Sector CEOs session with the largest speaker lineup ever. This collaboration with UNWTO brought together ministerial officials and global industry leaders to engage in a direct dialogue under the topic “Embracing Regional Collaboration for Collective Growth”, and to explore how regional and inter-regional collaboration can create positive developments beyond geographic borders.

The fourth report of the UNWTO/GTERC Asia Tourism Trends, a joint research report between the World Tourism Organization (UNWTO) and the Global Tourism Economy Research Centre (GTERC) will be presented at the Forum. The joint report presents tourism trends and outlook of the region, and highlights the importance of regional collaboration to the adoption of 2017 as the International Year of Sustainable Tourism for Development by the United Nations.

GTEF 2017 will continue with its program tomorrow (17 October) with six inspiring panel sessions. Besides panels titled “Promoting a Shared Vision through Regional Collaboration”, “Driving Tourism Economic Growth through Innovation and Technology” and “The Greater Bay Area – Visionary Collaboration in the Making”, there are three concurrent sessions and workshops themed as “Consumption Upgrade & Market Strategies”, “World Heritage & Regional Cooperation” and “Building a Brighter Future for Cities through Collaboration”, outlining directions and a comprehensive picture of future tourism development for delegates. Through different sessions and networking activities, the Forum will once again offer unrivalled opportunities for business matching and networking for delegates from China and across the world.

The Global Tourism Economy Forum • Macao 2017 is hosted by the Secretariat for Social Affairs and Culture of the Macao SAR Government in collaboration with the World Tourism Organization, co-organized by the China Chamber of Tourism and coordinated by the Global Tourism Economy Research Centre. GTEF’s supporting units include China National Tourism Administration, All-China Federation of Industry and Commerce, the Liaison Office of the Central People’s Government in the Macao SAR, Office of the Commissioner of the Ministry of Foreign Affairs of the People’s Republic of China in the Macao SAR, Macao Government Tourism Office, World Travel and Tourism Council, Pacific Asia Travel Association, World Tourism Cities Federation and European Travel Commission.

For more information about the Forum, please visit www.gte-forum.com and stay tuned for event updates via official social media channels of GTEF.