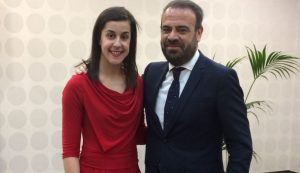 Meliá Hotels International today announced a new sponsorship agreement with Carolina Marín, badminton champion at the Rio de Janeiro Olympic Games in 2016. Marin will become a company Ambassador during her activities up to March 2018.

This partnership is in line with the hotel company’s positioning as a figurehead of Spanish and Mediterranean values and culture in its global expansion, and also with the prestige of the Olympic champion in international markets, especially Asia Pacific. Meliá has chosen Carolina Marin to be its ambassador in the light of her long history of success: a gold medal at the Olympic Games in Rio de Janeiro, world champion in 2014 and 2015, twice champion of Europe and winner of the National Sports Award for the best Spanish sportsperson of 2014, among many other achievements.

Gabriel Escarrer, Vice President and CEO of the hotel chain stated that “the partnership with Carolina is a sign of our alliance with sport and the most important values in our society, represented by excellence in Olympic sport. Carolina is also an icon for Spanish sportswomen that makes us feel proud of our homeland and also our international dimension”.

For her part, Carolina Marin stated that “it makes me so proud to become ambassador of Meliá, one of the most important hotel groups worldwide, and the leading hotel chain in Spain. I’m thrilled to have the opportunity to collaborate with them for growing in Asia-Pacific, and to help strengthening the links between our cultures”.

The sponsorship deal will focus mainly on Asia Pacific, where badminton is extremely popular and where most of the tournaments that form part of the BWF World Superseries 2017 Badminton Circuit are held. Meliá Hotels International has 17 hotels in the region and plans to reach 30 hotels by 2020. Southeast Asia has become one of the markets with the highest growth rates for the company and it hopes to increase its brand recognition and positioning through the alliance.

The company also aims to maximize synergies with the more than 280,000 followers that Carolina Marin currently has on Instagram.