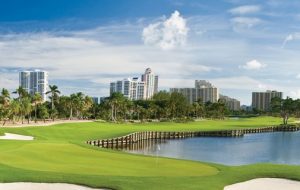 Miami, Florida (United States) – July 11, 2017 (travelindex.com) – Demand for golf travel across the globe is expected to grow for the foreseeable future, but at a slower pace than in recent years, due in part to limits on supply in popular golf destinations.

During his Opening Address at the three-day event, IAGTO’s Chief Executive, Peter Walton, made three projections for 2017-2020. He forecast that:

“2017 will mark the sixth year of consecutive growth for golf tour operator sales worldwide with forward bookings for this year up 7.1% year on year when measured in January, and 7.9% in April,” Walton predicted. “Outbound markets performing particularly well and above the global average include India, China, Korea, Asia in general, Canada, Australia and the Netherlands, with European markets overall just above par.

“Our operator members saw their business increase by an average of 7.5% in 2016 which, although still very strong, is a couple of points below the average of the previous four years (9.8%).”

However, Walton cautioned: “Limits to supply in popular golf destinations are likely to have the effect of reigning in the rate of growth of golf vacation sales, to, we estimate, between 5% and 7% per year.”

Focusing on the USA’s golf destinations in his opening address, Walton noted that despite available capacity of, on average, over 19% at golf courses in the USA open and eager to receive international golf visitors, the USA was not currently in the front line of reaping the benefits of the global growth in golf travel. Growth in sales and forward bookings for golf visitors in 2017 reported by golf resorts, golf courses and hotels in the USA were currently running at less than half the global average.

Trump National Doral Director of Golf and Travel Industry Sales, Carrie Ruiz, was delighted at the success of NAC 2017, saying: “The event has exceeded my expectations. It’s fantastic. I am thrilled with the response from the attending buyers and suppliers.

“We hosted the inaugural NAC event in 2009 and we have gone through such dramatic changes since then, spending $250 million on a complete renovation over three full years from early 2013. We wanted every one of the tour operators to have a personal experience, not only of the bricks and mortar but of the service levels as well. And the feedback we are getting from them is that this is a brand new very positive experience. They can sell the property so much better now that they have been here.”

NAC 2017 was also supported by the Greater Miami Convention & Visitors Bureau, Visit Florida and Brand USA, demonstrating the importance of the event locally, regionally and nationally.

IAGTO’s 9th annual North America Convention attracted 423 delegates from 36 countries, representing a record number of both buyers and suppliers. “This was by far the strongest NAC that we have staged to date, and the business conducted here at the event should help to drive golf tourism to the USA in far greater numbers, helping the country’s many and varied golf destinations to catch up with their competitors,” Walton enthused.

This year’s event, promoted as ‘Back to the Blue Monster’, represented an emotional return to Doral, the resort that had staged the first ever NAC in 2009, at the height of the global economic crisis. An increase in participation from Asian golf tour operators increased the number of buyer delegates to 153, who were able to meet with 161 different golf travel suppliers from across the Americas and the Caribbean to prepare their golf programmes for the coming season.

NAC 2017 attracted golf resorts from a broad range of American states, including golf destinations less well-known internationally – among them Alabama, Minnesota, Michigan, Wisconsin, Indiana, Washington, Virginia and New Jersey – along with the largest delegation to date from Puerto Rico.