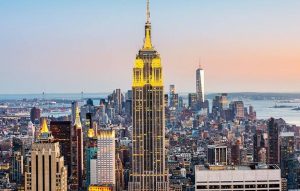 New York City, New York, United States, May 15, 2020 / TRAVELINDEX / NYC & Company, the official destination marketing organization and convention and visitors bureau for the five boroughs of New York City, today announced the formation of The Coalition for NYC Hospitality & Tourism Recovery. The Coalition will focus on messaging, marketing and promotion to restore New York City’s brand locally and beyond, and to safely engage, mobilize and champion all sectors of NYC’s tourism economy once the City begins to emerge from the Covid-19 pandemic.

The Coalition will support the work of Mayor de Blasio’s Arts, Culture & Tourism Sector Advisory Council and will work collaboratively with the New York Forward Re-Opening Advisory Board and the New York State Division of Tourism.

The Coalition will be led by five co-chairs appointed by Charles Flateman, NYC & Company Board Chairman and Executive Vice President of the Shubert Organization. The co-chairs are: Ellen Futter, President of American Museum of Natural History; Thelma Golden, Director and Chief Curator of The Studio Museum in Harlem; Danny Meyer, Chief Executive of the Union Square Hospitality Group; Lin-Manuel Miranda, composer, lyricist and actor; and Peter Ward, President of the New York Hotel & Motel Trades Council, AFL-CIO. NYC & Company will be responsible for coordinating and executing Coalition plans and managing work streams.

“New York City’s tourism, hospitality and cultural communities reflect our unmatched energy and optimism,” said Flateman. “New York City is also the world capital of coexistence. Even though we’ve had to create distance, with our world-famous toughness, immense heart and boundless compassion, New York will not stay down. As government leaders announce new social distancing guidelines, it is time to consider how we can begin to reopen our doors and safely reconnect with our city and with each other, and with the visitors who will one day again flock to New York.”
“NYC & Company’s mission has always been to maximize travel and tourism throughout the City, build economic prosperity, and share the dynamism of New York City with the world,” said Fred Dixon, NYC & Company President and CEO. “The Coalition will do this with new energy and vision for a changed world. Together, when the time is right, we will help our businesses reopen and inspire New Yorkers and visitors alike to safely explore and interact with the five boroughs once more.”

“New York City and its great institutions and diverse, vibrant communities are resilient,” said Futter. “Even as we are changed by challenging, heartbreaking events, our institutions, whether art, science or entertainment, will be a vital part of interpreting this global pandemic, of telling the moving stories of our human response, and of helping us to come together, heal, and re-engage. As it is safe to fully reopen New York City’s social, cultural and economic lives, we as a Coalition stand ready to help lead its recovery and to welcome back New Yorkers and our visitors.”
“The vibrancy of New York City’s arts and culture springs from its deep, astonishing diversity,” said Golden. “One of the most important reasons why people from around the world come to our city is because the world is already here, to be discovered and enjoyed in our museums, theaters, concert halls, and neighborhoods. I am proud to be a part of a coalition that has our wonderful diversity woven into its fabric.”

“Hospitality is the fabric of what makes New York City such an amazing place to live and visit,” said Meyer. “Whether on the stage, in our cultural institutions, or our restaurants, New York has always attracted and welcomed the top performers and audiences in all that we do, and our collective resilience will once again remind New Yorkers and visitors alike why they fell in love with this amazing city.”

“From Broadway houses to independent theaters, from marquee attractions to small businesses and restaurants, our beloved five boroughs tell a story unlike any other place in the world,” said Miranda. “Together, we will create a next act for our city. After this intermission, we will be ready to welcome the world back with open arms, so people can fall in love with New York over and over again.”

“The people of New York are resilient as they have shown time and time again,” said Ward. “The New Yorkers that operate our hotels, our attractions, our cultural institutions – they know why people come to this city and know how important the travel and tourism industries are. This coalition will not only help reopen our industry, but will lead the way in bringing visitors back to New York City, and showing New Yorkers it is O.K. to enjoy the things we love about this city again.”

The Coalition will develop citywide marketing, communications and advertising programs to spur a sense of confidence and safety; drive sales and engagement; advocate for industry initiatives and inform funding and policy-making; and create public information campaigns to share facts, updates, and opportunities. It will also lead the way in helping to revitalize and reaffirm the City’s brand positioning around the world following this most challenging time.

The Coalition will include leading medical and public health experts, hotels, restaurants, sports organizations, cultural and performing arts institutions, Broadway leadership and other members of the theater community, retailers, sightseeing companies, attractions and annual conventions/trade shows. Flateman has appointed 24 industry leaders from the five boroughs to comprise a Steering Committee that will help guide the Coalition during the recovery effort. The Steering Committee includes:

Both NYC & Company members and non-members from across the five boroughs and various business sectors are invited to lend their organizations’ name in support for the Coalition by visiting nycgo.com/recovery. The updated list of participating organizations is available at nycgo.com/coalitionmembers.

In 2019, New York City’s travel and tourism industry marked its 10th consecutive year of record growth, welcoming 66.6 million visitors for business and leisure trips. The economic activity of visitor spending supported almost 400,000 jobs citywide and generated close to $70 billion in economic activity. A forecast for 2020 is not yet available.

About NYC & Company:
NYC & Company is the official destination marketing organization and convention and visitors bureau for the City of New York, dedicated to maximizing travel and tourism opportunities throughout the five boroughs, building economic prosperity and spreading the positive image of New York City worldwide. For all there is to do and see in New York City, visit nycgo.com.