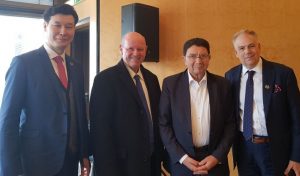 Victoria, Mahe (Seychelles) – March 12, 2019 (travelindex.com) – The world of tourism are all back in their respective countries after a week long program at the ITB Tourism Trade Fair in Berlin aimed at positioning their country as the No.1 Tourism Destination. Success will be determined as time goes on, but for now the challenges seen will be analysed and discussed with tourism stakeholders in the four corners of the world. What is clear is that tourism does not, and it will not be consolidate by itself and it requires a dynamic private sector trade working hand – in – hand with its facilitator, the Government.

Tourism Ministers of the Year named at event during ITB 2019

Greece and Jamaica Tourism Ministers are the Tourism Ministers for 2019. This recognition received during the ITB Tourism Trade Fair in Berlin comes after both these Tourism Ministers had been recognised for their continued dedication to their industry. The Minister from Greece is today being credited for having propelled her tourism industry to new heights and this is having the needed positive effects for the Greek Economy. The Jamaica Tourism Minister on his part has championed the sustainable tourism vision and spearheaded the creation of “The Global Tourism Resilience & Crisis Management Centre”.

Gérard Lefebvre, the President & CEO of Cleverdis is not just a respected partner but he is also a good and sincere friend. Gérard Lefebvre’s group of companies is also responsible for Daily News Publications at most of the biggest and most important Tourism Trade Fairs such as The Daily ITB News Magazine.

The meeting at ITB in Berlin was the opportunity to discuss tourism today as it was an opportunity to renew our friendship. We discussed what lies ahead, and analysed together the avenues of cooperation between us. I remain so proud to be able to count Gérard Lefebvre as one of my dear friends.

Philippe Doki-Thonon of Reunion at the Maitres Cuisiniers de France

The Vanilla Islanders are on the move as we take note that Philippe Doki-Thonon of Reunion is a delegate at the 65th General Assembly of the Masters Cook of France taking place at the City Hall of Paris.

Philippe Doki-Thonon is a well known restaurateur of Reunion with the popular main street restaurant Roland Garros at St. Denis being part of his many businesses. He is also a keen scuba diver and has published his prized underwater photos for all to see.

Top25Restaurants.com, after the great success in the Asia-Pacific region, the world’s first restaurant guide based on AI is coming to Paris, France, Reunion Islands and Vanilla Islands soon. Watch this space!

Award winners from previous years always take part in presenting the outstanding women in tourism with the Celebrating Her Awards by the International Institute for Peace Through Tourism (IIPT). The award – initiated by men, by the way – is supported by ITB Berlin and CSR Officer Rika Jean-François. Nothing is more effective than learning from one another – that is the motto of the women executives and entrepreneurs in tourism, politics, the media, and NGOs that come together at the Palais am Funkturm on the eve of International Women’s Day.

Women and their qualities shape the business world by mutually supporting each other, working tenaciously to improve working conditions for women and gender equality, exchanging views with one another, and by building and maintaining a close network of contacts. In this case, they each persistently shape their own area of tourism into a sustainable, peace-making, and flourishing industry. “Each one of you is a role model for every one of us,” said US Moderator and Strategic Advisor Anita Mendiratta of CNN’s T.A.S.K. Group.

“This is a very important moment for me,” said Rika Jean- François in her greeting, “it is more important to me than International Women’s Day.” The day does not reflect “the urgency that we women have.” The day is necessary, however, as was summarized by the seminar on improved working conditions for women that took place on the occasion of the UN’s second Global Report on Women in Tourism. The Celebrating Her Award is presented in five categories. This year, Egyptian Minister of Tourism Rania al Mashat was happy to receive the award for Tourism Policy and Leadership, her Greek colleague Elena Kountoura for Tourism Strategy and Resilience, and long-time fighter Mechthild Maurer, CEO of ECPAT Germany, committed to socially responsible tourism, for Child Protection in Tourism. ITB is a member of ECPAT as well. In her words of introduction, Anita Mendiratta spoke about how, for over 25 years, winner Jane Madden, managing partner of FINN Partners, has given a voice to the voiceless and looks where others turn away.

Jane Madden received the Sustainability Award for her dedication to Corporate Social Responsibility. Founder and President Helen Marano of Marano Perspectives was honored by the UNWTO community. The long-time advocate sent her thanks in a video message. Former UNWTO General Secretary Thaleb Rifai accepted the award on her behalf and thanked her for her commitment to forging global alliances that bring tourism forward as a powerful force towards positive development for all.

Alain St.Ange, the former Minister of Tourism. Civil Aviation. Ports and Marine of the Seychelles was part of the invited speakers at the PATWA 2019 conference held at the ITB Tourism Trade Fair in Berlin.

St.Ange spoke about Global Tourism – its Trends and Challenges.

The former Seychelles Minister said as he opened his address that tourism was doing well as was being confirmed by the UNWTO and by our respective counties. He saluted Greece for having moved their tourism industry as never done before, and for making sure it helped transform their economy. This he said in the presence of the Tourism Minister of Greece amongst many other tourism Ministers from the Community of Nations.

On the point touching on trends and challenges facing Global Tourism, the Seychelles former Minister spoke with his usual eloquence without any prepared text but relying only on his knowledge as he spoke from his heart capturing the attention of the delegates present.

St.Ange spoke about airlines, security, threats and wars as challenges facing countries way beyond their own borders and outside of their own control.

Others speakers who took to the podium after Alain St.Ange were tourism ministers from Jamaica and Mauritius as well as representatives from India and the CEO of PATWA himself.