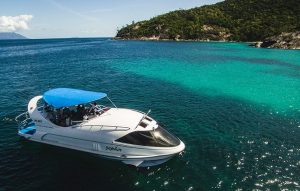 Victoria, Mahé (Seychelles) – September 9, 2019 (travelindex.com) – News from Paris has confirmed that Air France is restarting its non-stop direct flights to Seychelles commencing 31st October. After many years of absence, the blue, white and red tail of the Air France Colours will once again be landing at Seychelles international Airport. This is a real benefit for the mid-ocean islands that are so dependent on tourism for their economy.

The last couple of years since Air Seychelles discontinued its own service to Paris, the route had been left to JOON, the low cost carrier of Air France. But the recent announcements about the future of JOON has prompted Air France to re-look at Seychelles once again.

France remains a main tourism source market for Seychelles. The private sector trade of the islands have invested millions over the years in that source market that knew the Seychelles and that saw the tropical year-round destination as an ideal holiday spot. The French Language is one of the island’s three Official Languages.

The arrival of Air France is seen as a benefit for the Seychelles tourism industry. The advertising might of the airline will help the visibility of the islands. This news could not have come at a better time for Seychelles as it prepares for its annual participation at TOP RESA, the Paris Tourism Trade Fair in the coming weeks.

President Danny Faure chaired a scheduled meeting of the Cabinet on Wednesday 21st August, at which a number of legal and policy memoranda were considered. Cabinet approved the Tourism Development (Accommodation Establishments) Regulations was part of the news released to Seychelles on the 22nd August.

The freeze on La Digue’s accommodation network with a set time frame following the initial drafting of land use plans and carrying capacity seems to now be extended and made as a regulation. The reasoning behind the regulation is nevertheless flawed.

Controlling the number of visitors to La Digue Island cannot only be seen to punish only the La Digue Business Community and the island’s population. As the inhabitants of the island see limits imposed on them with the aim of managing visitor arrival numbers and to ensure that the La Digue services can cope with the influx of visitors, the island continues to see charter yachts enter La Digue daily. An experienced local sea captain took the trouble of contacting the Saint Ange Tourism Report when the news of the new regulations were being discussed.

“Controlling the overnight tourism numbers cannot only be for tourism establishments who are now limited to ten pax when a bare boat charter anchored at La Digue carries ten passengers who land on the island and use the facilities and infrastructure; except they do not employ any Diguois and these boat owners are not islanders” the local sea captain said.

The new regulation is not controlling visitor arrival numbers but is instead removing food from the islanders of La Digue and encouraging other businesses to milk the benefits of the La Digue attractions. Why punish La Digue Islanders and its Business Community?

Tourism 2019 and the Seychelles economy

Tourism Operators are facing new cost operating challenges that have been compounded with the drop in exchange rates of the Euro. The various reasons being aired by the private sector trade for the challenges ends up with the high operation costs being levied in Seychelles. Seychelles cannot operate in isolation from the region and operation costs cannot continue to increase with no control.

Work permits are also being listed as continued constraints. Delivering on service in the tourism industry is a must and any bureaucratic machine that only delays recruitment unnecessarily is hurting the economic development of Seychelles.

The exchange rate for the Euro in 2019 is also listed as a challenge when compared to 2018. This the islands have little control on, but understanding the shortfall is important for those deciding on the Seychelles tourism future.

The La Digue businesses had an additional challenge with the extended power cuts that virtually killed their August. What the State will do to compensate the island inhabitants and its business community who suffered extensively across the board is left to be seen.

“Precision, Performance and People: Re-Writing Our Narrative in Sustaining the Tourism Business” was the topic of the conference I attended in Winnipeg in Canada recently. This working visit, which was my first one in Canada, opened new doors as it helped consolidate working partnerships with members of the press fraternity and tourism operators who have been associated with Seychelles and the African Continent for many years.

The Islander Weekly – a new weekly newspaper for Seychelles

A new weekly newspaper has been seen in shops and retail outlets in Seychelles bringing more diversity and a new take on the happenings in Seychelles. The news paper’s editor is Herve Anthony.

The online version of the newspaper at is updated every Thursday

The Catholic primate’s three-nation tour started in Mozambique and will end in the island of Mauritius. The last pope to visit Madagascar was John Paul II 30 years ago.

The Pope’s visit to the Vanilla Islands and to Mozambique has increased visibility of the region and will have the spot light on the islands being visited for months to come.

ANTANANARIVO: An estimated one million people gathered at Madagascar’s Soamandrakizay stadium in the capital on Sunday to hear Pope Francis say mass on the second leg of his three-nation African tour.

The massive crowd had waited patiently, stretching into the distance from the early hours, to see the pope, the first pontiff to visit in 30 years.

“Organizers estimate there are around one million people,” a Vatican spokesman said.

Organizers had said earlier they expected around one million attendees. Some described it as the biggest public gathering in Madagascar’s history.

Many people wore pope-emblazoned white and yellow caps — the colors of the Vatican, and they cheered as the pope-mobile made its way through wind-swept clouds of red dust picked up from the stadium floor.

During the homily, the Argentine pontiff urged them “to build history in fraternity and solidarity” and “in complete respect for the earth and its gifts, as opposed to any form of exploitation.”

He spoke out against “practices that lead to the culture of privilege and exclusion” and criticized those who consider family “the decisive criterion for what we consider right and good.”

“How hard it is to follow him (Jesus) if we seek to identify the kingdom of heaven with our personal agenda or … abuse the name of God or of religion to justify acts of violence, segregation and even murder.”

After mass the pontiff will visit Akamasoa, a city founded by Argentinian priest Father Pedro, who has lifted thousands of Malagasy waste-pickers out of poverty.

Early Sunday morning, in Antananarivo’s Andravoahangy church, pastor Jean-Yves Ravoajanahary had briefed 5,000 people on the two-hour trek they would have to make to get to Soamandrakizay stadium.

“We are going to divide worshippers into groups of 1,000 because the road is very dangerous. At this time pickpockets and bandits are out to mug people,” he said.

One by one the groups started the journey, huddled together in the cold and singing praise to the Virgin Mary. Traffic was gridlocked.

Hery Saholimanana left his house in the early hours with three family members.

Many had already set up tents on the outskirts of the city on Friday, festooned with posters of the pontiff.

Prospere Ralitason, a 70-year-old farm worker, arrived with some 5,000 fellow pilgrims from the central eastern town of Ambatondrazaka, 200 kilometers (125 miles) away.

“We are tired, but it’s worth making all these sacrifices to see the pope with our own eyes and receive his blessing,” he said.

Thousands of young people — mainly scouts — gathered for a vigil at Soamandrakizay on Saturday, waiting hours in the heat for Francis to arrive.

“I am here to ask for the pope’s blessing to face the harsh realities of life, insecurity, poverty and corruption,” said 17-year old student Njara Raherimana.

“All this gives me hope for change in my country,” echoed fellow student, Antony Christian Tovonalintsoa, who lives on the outskirts of the capital.

During the vigil, Pope Francis lauded the “joy and enthusiasm” of the singing crowd.

He encouraged the youth not to fall into “bitterness” or to lose hope, even when they lacked the “necessary minimum” to get by and when “educational opportunities were insufficient.”

Earlier on Saturday, Francis made an impassioned plea to Madagascans to protect the Indian Ocean’s unique environment from “excessive deforestation.”

Weeks after a spike in fires in the Amazon, the Argentine pontiff told his hosts they should “create jobs and money-making activities which respect the environment and help people escape poverty.”

Madagascar — famed for its immense diversity of flora and fauna — is home to 25 million people, the vast majority of whom live in poverty on an income of less than two dollars a day.

More than half of its young people are out of work, even if many have good qualifications. The last pope to visit Madagascar was John Paul II 30 years ago. Francis also visited Mozambique earlier in the week, and is due to travel to the island of Mauritius on Monday.

The island’s Tourism Board has posted recently the following:- We are pleased to introduce to you ”The Seychelles Tourism Festival 2019”.

The Tourism Festival, marks the annual tourism week in the Seychelles in attempt to raise awareness of the significance of tourism in our country and its’ people.

The Festival is a celebration meant to commemorate World Tourism Day and includes the annual Tourism Ball, Food Fiesta, Clean up the World, Tourism Mass, Public Speaking and many more.

Experience this cool vessel, Zephir and enjoy the underwater life of Seychelles without getting into the water. Creole Travel Services knowledgeable team welcomes visitors on board to sail and witness the beautiful marine life of Seychelles through the widening viewing glass of Zephir. The adventure starts from respective jetties all the way to its designated marine parks where clients would get the wonderful opportunity of glimpsing and identifying different marine species such as lazy sea cucumbers, cute starfishes, shy sea turtles, beautiful baby sting rays, school of colorful fishes and many more. Ofcourse, the fun does mot stop there! On your way back, you will get to see the picture perfect skyline beauty of Seychelles as you cruise through the grandiose vast water of the North coast embedding you with remarkable experiences.