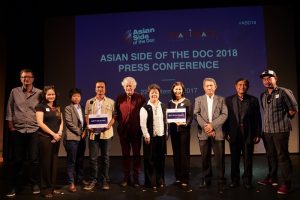 Bangkok (Thailand) – September 26, 2017 (travelindex.com) – Thailand will host the leading marketplace for documentary programming, Asian Side of the Doc, for the second year running in Bangkok, from January 30 to February 2, 2018

The Department of International Trade Promotion or DITP is positioning the 8th edition of ASD as a strategic platform to promote the documentary film making industry to achieve the objectives of Thailand 4.0, a new economic model that aims to lift the country out of the middle-income trap and establish it as a player in the smart, innovative, and high value domain.

Considered a vital economic driver to achieve those 4.0 goals, the Thai film industry also seeks to support creativity, enhance culture, and deliver high-value services as well as improve the country’s competitiveness in a regional context.

“The government’s promotion of the film industry focuses on the development of production capacities. The policy encourages a proactive filmmaking business as well as creating opportunities to network in both domestic and international markets,” said MAXIMAGE Company Limited managing director and head of the ASD18 organizing committee, Mrs Viwan Karnasut. “Part of the strategy is to support activities such as international film festivals and marketplaces that create a business platform for filmmakers, distributors, and investors worldwide.”

To back-up government’s efforts, the Thailand Documentary Filmmakers Association, or TDFA, has been established to build competitiveness and promote Thailand as a hub for international and regional documentary filmmakers; a marketplace, and venue to host the industry’s leading events such as ASD.

ASD is presented by the organizers of the Sunny Side of the Doc or SSD, the biggest documentary marketplace in Europe. Founded by Mr. Yves Jeanneau, the Academy Award-winning French film producer, SSD has been organized for 28 years in La Rochelle, France attracting more than 2,000 visitors annually.

Recognizing the potential of the documentary film market in Asia, ASD was established in 2010 as parallel documentary market place for the region.

Recognized as a major platform to promote Asian documentaries to the world, ASD generated estimated minimum revenue of 160 million baht.

Based on its success, the organizers broke tradition opting to return to Thailand for a second consecutive year.

The decision to return to Thailand for the 8th edition of ASD was based on Thailand’s readiness in terms of supporting facilities, the diversity of travel destinations, and the professionalism of Thai documentary filmmaker industry.

The event will take place, from January 30 to February 2, 2018, at the Centara Grand at Central Plaza Ladprao, Bangkok. Over four days, more than 500 delegates, including producers, directors, distributors, key decision makers, investors, and consultants from 40 countries will meet at ASD18 for sales, networking, pitching sessions with prizes, conferences, and the added value of tailored one-to-one meetings with key buyers from Asia and beyond.

An ASD Documentary Workshop & Master Class featured as part of the pre-event activities, held on September 19-22, where documentary producers and directors gained insights on how to develop documentary projects.

International experts and trainers who shared insights at the Master Class were Christian Popp – co-founder of YUZU Productions in France, Esther van Messel – CEO of First Hand Films Switzerland; and Pailin Wedel, a Thai-American journalist and filmmaker who won the Best ASEAN Prize at ASD16

A total of 38 documentary projects from seven countries were submitted to the ASD selection jury, which selected 10 projects to attend the workshop, of which seven were created by Thai producers. At the workshop, six projects were shortlisted for the final pitch with the winner will go to ASD18 to pitch on the main stage. “The ASD18 will increase the value of documentary filmmaking. Besides the revenue from the trading session, the event is an essential platform for networking, branding, knowledge sharing, and above all, promoting Thailand as a connecting hub for the documentary filmmakers industry across Asia. It is expected that this trade event will generate at least 200 million baht in revenue.” said Mrs. Viwan Karnasut.

Some of the major producers and broadcasters of international documentary and factual programming heading for ASD18 include the National Geographic, Discovery Asia, NHK, CCTV, KBS, ABC, PBS, ThaiPBS, and other Thai broadcasters.